Beginning in the 1970s Don became an advocate for social change, organizing against the Vietnam War, racism, and advocating for the rights of women, gay people and indigenous people. In 1977, as a student he an for the Mayor of Edmonton, not to win but to raise important issues in a hotly debated election. Below are excerpts from his program. His views on some of these questions have changed but in hindsight his program was extraordinary — decades ahead of its time. While there has been much progress, sadly today the struggle continues on all these issues. 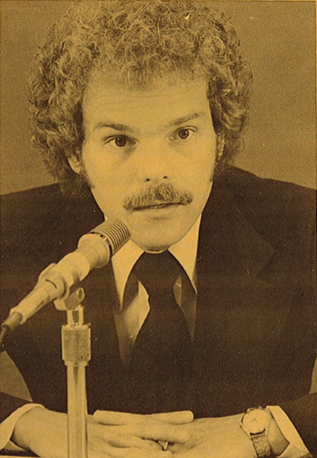 The discrimination and oppression that women face at all levels of this society is actually intensifying. The wage gap between men and women in Edmonton has widened since the 1974 civic election, not just in average weekly salary but across a wide range of occupational classifications.

More than one-third of Edmonton children below school age have working mothers. Edmonton Social Services’ most conservative estimate of the number of children needing daycare is 22,000. Yet all government subsidized daycare centres in the city hold only 832 children! Several Edmonton centres have folded recently due to lack of funds. Only three hospitals in Edmonton perform abortions, none of these after the 12th week of pregnancy. Many women have been forced to go to Calgary for abortions. Countless others have unwanted children.

Gays and lesbians face a deep oppression and discrimination rooted in the nature of this society.

In Edmonton, the Gay Alliance Towards Equality has recently submitted a brief to City Council outlining a need to counter discrimination in hiring, promotion, tenure and assignment to duties faced by homosexual and bisexual people employed by the city. Gays and lesbians in Edmonton have no legal protection. Racing steward John Damien
was fired by an agency of the Ontario government for the sole reason that he is a homosexual. The reinstatement of Damien would be a victory for gay rights in Edmonton.

The labor movement in Edmonton is under attack. The Public Service Employees Relations Act (Bill 41) denies 20,000 Edmonton 20,000 Edmonton provincial employees basic union rights, such as the right to strike. Working conditions are so bad at city hall that the yearly staff turnover is 40 percent. Inside workers at City Hall (CUPE 52) had to strike to end management’s black book system but secret dossiers still remain on most other city employees.

Wage controls were readily supported by Council, even prior to the Lougheed government, and City library employees considering supporting the Oct. 14 day of protest were threatened with dismissal by Alderman Ron Hayter. City Hall has not fought the growing campaign to deny Edmonton workers basic bargaining rights; it has helped lead it.

Low Cost Quality Housing for All

Edmonton has one of the worst housing crises of any Canadian city. Apartment vacancy rates over the past year averaged effectively zero percent. Native people and thousands of other poor live in appalling conditions. Yet in 1976 only 96 public housing units were started in Alberta!

New home prices have soared 261.7 percent since 1971. Used home prices now average $63,800, up $11,000 from January 1976 and topping most other Canadian cities. Most ordinary workers have no hope of ever owning their own home. Since the 1974 civic elections the average apartment rent has risen approximately 60 percent. Even totally inadequate rent controls – fraught with loopholes, unenforced, and exempting new buildings – are being phased out. City council has been content to leave us at the mercy of profit-hungry developers and rent-gouging landlords.

Brutal conditions faced by native people in Edmonton are not improving. Unemployment at eh Enoch reserve is 30 percent, and 80 percent of adults there have less than grade nine education. Up to 65 percent of admissions to provincial jails are native people. The Lougheed government passed legislation making it impossible for native people to file caveats on land stolen from them.

As the crisis of Canadian society intensifies, racist and xenophobic attacks are being condoned and conducted by all levels of government. The Federal Bill C24 puts severe limitations on immigration and threatens the security
and human rights of immigrants living in Canada. City Council voted against opposing racist tuition fee increases for foreign students. Already statistics show that the increases are limiting students from Third World countries.

Council has given implicit support to racist regimes in Southern Africa by refusing to support protests and boycott activities of the Free Southern Africa Committee and by remaining silent when 61 anti-apartheid protesters were arrested for demonstrating against a South Africa-linked team on a city-owned cricket pitch. Chilean refugees have been harassed by Canadian police.

Police break-ins at the Praxis headquarters in Toronto and the Agence de Presse Libre in Montreal illustrate the co-operation of local police and RCMP in surveilling and harassing opponents of the status quo under the guise of alleged threats to “national security.” Secret files appear to be held on a wide range of dissidents in Canada, even including NDP leader Ed Broadbent.

An investigation of Edmonton police brutality against striking Parkland nursing home workers has been ordered. Police here have a long record of clearing picket lines to allow acabs to break strikes. Native people have faced countless incidents of intimidation violence. Moreover, we wonder, does the dreaded Chilean secret police (DINA) which is operating in Canada have contacts with police agencies here? Will there be a Commonwealth Games
“crackdown” on left wing groups, gays and immigrants as happened in Montreal before the Olympics?

Council Must Support Self-Determination for Quebec

Quebec is the central issue of Canadian politics – an issue which expresses itself sharply in Edmonton and in City Council. At the Federation of Canadian Municipalities conference in May, Alderman Ed Leger argued that separatism borders on sedition, and that demands of the Quebecois for national rights “should not be taken seriously.” Former mayor Rod Sykes of Calgary has stated that the Parti Quebecois is a band of “saboteurs and criminals.” A hockey
team from Quebec was attacked by Edmontonians shouting anti-Quebecois slanders.

All of this reflects the growing “save Canada at all costs” campaign being generated by Canada’s rulers. The function of the campaign is to create a hysterical pro-Canadian-unity atmosphere in English Canada which would make it impossible for the Quebecois to determine their future.

For the Rights of Franco-Albertans

There are 39,000 Franco-Albertans in Edmonton, approximately 6 percent of the population. Yet no exclusively French education is available. Three elementary schools give 80 percent French instruction, but because of limited capacity, francophone students are being turned away. No busing is available to these schools. Only one city high school, holding 670 students, gives 80 percent French instruction.

Jobs for All: Fight Inflation

Tens of thousands of Edmonton workers have had their wages “restrained” at the hands of Trudeau’s anti-inflation board, while profits and prices lie virtually untouched.

Democracy in the Schools

Budget cuts have meant fewer teachers being hired, class-size increases, limiting of courses, cuts in options and deteriorating conditions in the schools. $2.6 million was cut from the 1975 EPSB budget alone.

Tuition fee hikes and youth unemployment limit accessibility for working people to university. The schools are authoritarian institutions where students have few rights.