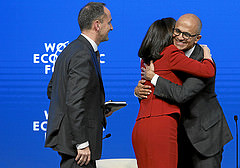 Davos: One of the most anticipated discussions at this year’s meeting was the plenary session on The Digital Economy. Given that I wrote the book that coined that term 20 years ago, I attended with great interest.

Unfortunately, the group didn’t really explore the state of the digital economy, but rather centered on all the great things technology is doing around the world. The discussion started on this bright note when the moderator asked whether each panelist was optimistic or pessimistic about the impact of technology on society. To this group the question was a rhetorical one, and predictably all panelists expressed great enthusiasm for what has been accomplished and the great strides the future holds in store.

They said that digital technologies used in areas from education to farming to healthcare have transformed communities and raised living standards around the world. As broadband capacity is rolled out to the four corners of the world, standards of living will increase even more.

Facebook’s Sandberg talked about two brothers in a village in India where they could not go to hospitals, but once they got access to the Internet their lives improved. “There are many other stories and therefore I am optimistic. Technology is both creator and destroyer of jobs but I am a huge optimist,” she said.

Sandberg did warn that without the proper measures, there is no guarantee that the benefits of technology would be distributed evenly. Policy-makers must take action to promote inclusion, otherwise women will not get the same opportunities. She noted that currently more than half the Internet’s content is in English and that women typically receive access to smartphones later than men.

During the session I frequently felt that that neither the optimistic statements of hope or anecdotes of those whose lives have improved adequately dealt with the challenge of the digital economy. I was tempted to quote Bill Clinton: “It’s the economy, stupid.”

The Digital Economy has become THE Economy. Yes, technology has created many wonders, but if we look at the macro level, the scorecard on economic results of technology are so far troublesome. Technology has unquestionably been at the heart of some negative developments including massive structural unemployment; growing social inequality where the benefits and wealth generated by technology have been asymmetrical; a fracturing of public discourse; and the loss of privacy and the rise of a surveillance society to name a few.

The panel touched superficially on several issues, such as unemployment. For the first time in history, economic growth is not generating a meaningful number of new jobs. Factor in the hangover from the financial collapse of 2008 and we’re witnessing youth unemployment levels across the western world from 15 to 60 percent.

But panelists said that this was a temporary problem and not a structural problem. Such creative destruction has happened at various junctures in history. Google’s Eric Schmidt argued that: “Almost all of the problems we debate can be solved by more broadband connectivity.” He cited broadband as the key public policy initiative that can promote social benefits ranging from good governance to education to human rights.

Microsoft’s Nadella agreed, saying that in the industry “there’s a consensus that low-cost bandwidth is a must.”

Vodaphone’s Colao likened the digital economy to a movie. “I can tell you that this is just the beginning of a great story, it is like a movie. We are at the beginning of something amazing. In Turkey, we have farmers who are using our technology and 50 per cent of them are women. Then there is education of teachers in Africa..

“The last scene of this movie should be around 10-15 years,” he added, but that steps must be taken to ensure all members of society benefit from technology’s arrival. “We need to see the benefit of technology and make sure that this movie gets a happy ending.”

Looking ahead, Schmidt offered one prediction regarding the future of the Internet, namely that “the Internet will disappear.” He predicted that the growth of smart devices and the Internet of things in the years ahead will eliminate the barrier between being online and offline.

Schmidt, a thoughtful observer of the big changes on the digital age compared the current disruptions to jobs and the economy with other convulsive technology revolutions in history that have caused massive, if temporary problems in society. “Is it different this time?” That would have been a great question to debate.

We need the leaders of the technology industry to step up and start to frankly address the big problems of the digital economy — problems that are rooted in technology. Enough extolling the virtues of technology. Let’s start to build the partnerships between business, government and the civil society that can forge a new framework and action plan for ensuring that the smaller world our kids inherit is a better one.

Introduction to Davos 2015 from Don Tapscott