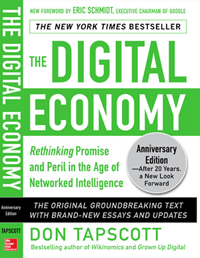 We have grown so used to being interconnected, to having the means of communicating with other people or finding out information at the touch of a screen that it is hard to believe that when the current generation of senior managers were in the early stages of their careers Google, YouTube, Facebook and Twitter did not exist. The thought occurs because Don Tapscott has just published the 20th anniversary edition of The Digital Economy (McGraw Hill), the book that gave many the first glimpses of what today’s business landscape might look like. Tapscott had already made his name by co-authoring Paradigm Shift, a book that – as well as helping to bring a hitherto reasonably obscure scientific term into the mainstream – went some way to explaining that the technological developments emerging in the early 1990s were going to amount to a revolution in how we did business. But The Digital Economy went rather further and – viewed today – was remarkably prescient.

Read the full article on Forbes.